Some time ago, Raymond van Barneveld (five-time world darts champion) started the Clear program. After years of struggling with type 2 diabetes, he had enough. Things had to change. Raymond suffers from cold and tingling fingers, which is of course not useful when playing darts. Raymond van Barneveld has already worn a blood sugar sensor once, but without guidance and tips he had no idea what to do with the information about his blood sugar. Let alone how to improve blood sugar levels. “It just left me feeling frustrated and insecure.” Raymond just wanted to know how he could lower his blood sugar levels by making adjustments to his diet. Then “Barney” (his nickname) read Rob’s story in the AD: how did Clear help Rob to get the blood sugar level under control. Raymond thought: “I think this is something for me, hopefully through Clear I will get the insights I have been wanting to know for a while.”

Raymond has now worn the first sensor in the run-up to the 2022 World Darts Championship. This first experience with Clear felt like a great success. By keeping track of his diet, seeing his blood sugar levels and Clear’s support, he now knows better what food does to his blood sugar level. And most importantly: what he can and cannot eat. For example, Raymond saw that a number of usual meals and drinks did not work for him: “After a cup of tea and a mandarin on an empty stomach, I peaked from 8.7 mmol/L to 13.7 mmol/L. Wow!” He therefore no longer eats the mandarin at the beginning of the day.

Barney went from one surprise to another because of the continuous insights. “The next day I only drank a Dolce Gusto mocha and my blood sugar rose to 13.1 mmol/L. Unbelievable! I wondered how this was possible and did not know that a lot of sugar had been added in this coffee.” Hidden sugars are a major problem, especially for diabetes patients. For a long time there has been a trend in which ‘light’ products are promoted. These products are often low in fat. By removing fats, the product also loses taste. Sugars and sweeteners are often added, resulting in a sharp rise in blood sugar.

Raymond likes a glass of soda every now and then. He has learned that 7-Up Free is fine. In addition to sugary soft drinks, he also avoids fruit juices, which can quickly raise blood sugar levels. Read more about it in our blog: The battle between fruit juice and cola.

Many packages can also mislead, Raymond found out. Sometimes it is prominently displayed on the front: no added sugar. But then there is sugar in it from fruit concentrate. However, the Clear sensor picks up on this. The ‘Breaker’ yogurt also had to pay for it: it turned out to contain 26 grams of sugar. That’s about 6 sugar cubes.

Furthermore, a breakfast with oatmeal turned out not to be a good option for the darts professional. “I’m peaking very high after this breakfast.” A curry with cauliflower rice, on the other hand, turned out to be a good and tasty option. “Before a darts match it is sometimes difficult to decide what I can eat, often I am in England and not every type of food is within reach. With some tips from Clear, I can now better prepare for this.”

As icing on the cake (which he doesn’t eat too often!) Raymond had also lost 2 kilos after using Clear for two weeks. We are curious what insights Raymond will get when he starts the next sensor!

Watch and listen to Raymond’s experience story in the video 👇 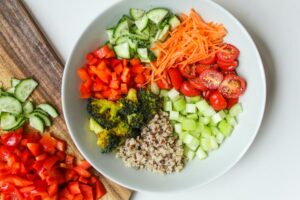 If you can’t lower your blood sugar with a diet…

Jacqueline (48): “A cup of chocolate milk spikes my blood sugar!”

I developed type 2 diabetes during my time as an entrepreneur. I was busy busy busy. I didn’t take enough time to eat healthy and exercise. Due to stress, I rewarded myself with good food.

Safiera: “Constantly insight into how your body works”

It is a special sensation to suddenly have insight into the functioning of your body.